I may not have slept last night but it’s all worth it!

For the last few weeks Otis was a good little sleeper. He would take hour long naps during the day and at night would sleep at least 4 hours at a time and sometimes up to 6 hours at a time.

You will note that the above paragraph is written in the past tense. The last 3 days have been markedly different. His naps have been 20-30 minutes long which is basically enough time for mom to start a project, but not complete it. So yes, the cleaning supplies made it to the bathroom and the vaccum made it to our room, but neither bathroom nor bedroom floor have actually been cleaned. Oh well. This I took in stride. It’s the nights . . . . .

The last 3 nights he’s been waking up every 1.5-2 hours to eat (growth spurt??? Btw Brad and I think he’s having a growth spurt or teething pretty much every time he is fussy so we are definitely crying wolf). Even that I can handle. The problem is that, even though he falls asleep after eating, he won’t go back in his bed. Each time I set him down he starts to fuss until Brad or I picks him back up. He has no problem sleeping on us, but then we have a problem sleeping at all.

So what was my solution last night? Uttering less than choice words at 3am. I will commend myself in that I did not direct those curse words at Brad or Otis, but rather at the universe in general. Feel free to envision me shaking my fist at the ceiling whilst muttering. I will admit that it was not my finest moment, but now that the sun is up I know that this too shall pass.

Today you are 3 months old and you are quite a big kid.  You weigh 13.5 pounds and I think you are 25 inches long (based on me using a tape measurer while you are squirming).  Your hair is out of control (in a good way) and your facial expressions are positively delightful.  I’m getting quite an ego because not only do you think I am hilarious, you also think I am a good singer.  We listen to Disney songs on Pandora and you are over the moon with my Ursula impression from The Little Mermaid.  You also like my dance moves.  I think our best dance song is the Bare Necessities from The Jungle Book.

Big things happened in month three.  You rolled over!  You have rolled from your tummy to your back 7 times proving that you are physically capable.  However you often forget that you have this skill and cry for me to flip you over.  You also started laughing this month.  You love to laugh when we tickle your neck.  It is truly my favorite sound in the whole wide world!

Your current favorite game is Scoot.  You lie on your back on the blanket and bend your legs.  Daddy or I put our hands against your feet and you push off propelling yourself a foot across the blanket.  We then repeat over and over again.  You think it is a blast.  You also love to “stand” with us helping you balance.  And you love to have “conversations” with the red frog that hangs from your bouncer.  You will just stare at him for 10 minutes.  You send him questioning raised eyebrows and flirty smiles and babble to him.  Besides me and your dad, red frog is your BFF.

Here are some of my favorite photos of you in Month Three.

Love you to pieces, 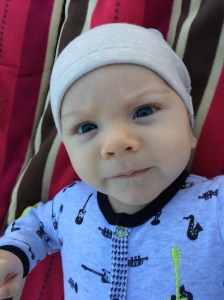 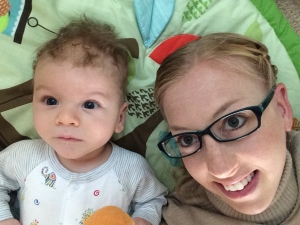 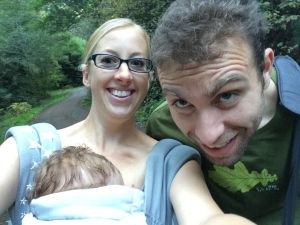 I am writing this blog post on my phone because Otis is contentedly draped over my shoulder sucking on his hand. Yes, I said hand, not thumb. He usually likes the whole fist but if he’s gonna choose just one finger to suck on he prefers his index finger. Tight- he’s already unique!

As everyone knows, there are good days and less good days. I am finding the same to be true with parenting. There are days when Otis screams and I can’t seem to console him. Inevitably those are the same days that the dog is pouncing and barking. Those are the days when I text Brad and tell him to pick up a bottle of wine on his way home from work 🙂

Luckily there are good days that outnumber those piss poor ones. Today was a great day.

Otis has been drinking a bottle (of my breast milk) once a day since he was a month old. This has been important to me because in January he will be in daycare four days a week when I go back to work. I also like the freedom to go to a yoga class or wherever and know that dad or grandma or gramps can feed him.

Well, a week ago he decided he no longer liked the bottle. Goodbye mom’s independence.  Grrrr!  After 4 days of no luck I managed to get him to drink a bottle the last two days by shaking his rattle the entire time he drank it. Don’t ask me how I thought to try that or why it worked. All I know is that my wrists were exhausted from holding a bottle and shaking a rattle, but it worked. I would try to stop shaking the rattle and he would spit the bottle out and scream. Start the rattle up again and he’d start sucking.  I was thinking “whose great idea was this?” Well, today I will proudly take credit for that idea as it seems to have made Otis a bottle taker once more. Tonight he drank his whole bottle and I didn’t have to shake a rattle, tap dance, or sing Disney songs to get him to do it. Score!

On top of that, he got to make his first art project at his friend Caroline’s house while mom hung out with her delightful mom friends.

And now he’s fallen asleep on me- heaven!  Today was a good day! 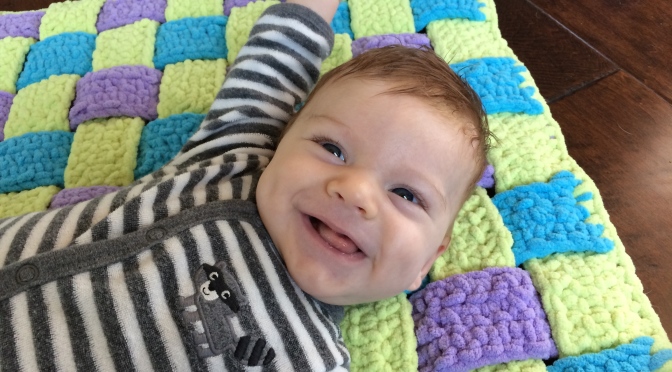 I now understand that capturing a quintessential Baby’s First Halloween photo is next to impossible.  Ten week old babies do not pose for the camera.  They do not enjoy wearing weird props.  And, if I am being really honest, there is always a very real chance that they are going to poop through their adorable outfit before you catch that magic moment on your iphone.  So, do I have an amazing Halloween shot of Otis?  No I do not.

Halloween preparations began while I was still pregnant.  Many of you know that Brad, much to my chagrin, aspires to have a pet goat one day.  Well, in an attempt to stall the inevitable I bought Otis this goat costume before he was even born.  Note that this is the stock photo, not Otis.

Perfect, right?  It looks warm and comfortable and would make Brad oh so happy.  Well, it came in a newborn size and a 6-12 month size so I bought it in the newborn size and the thing is gigantic.  I swear you could put a 2 year old in it, so I had to scrap that costume idea.

Luckily a neighbor of mine sent us the skeleton onesie you see in the featured picture, so Otis wore that Halloween morning.  By 2pm he had saturated it in poop so it was time to move on to costume #2.

Brad’s band was going to play music at a band member’s house Halloween night so I had decided that Otis could go to that as a fan/groupie.  I had bought him headphones so that he wouldn’t go deaf while the band played.  He had a onesie that a friend had made him that said “I’m with the band.”  And I also had a few props- a mustache pacifier and an elephant with the band’s sticker tacked onto it (the band’s name is Elephant).

Well, he hated the headphones.  He screamed every time I put them on.  Here is one shot days before Halloween where he somehow doesn’t look irate.

Also, not a fan of the pacifier, but again I managed one pre-Halloween shot.

And he isn’t able to hold things yet so the Elephant was going to be hard to incorporate.

So here is the best picture I got of his “costume.”  I barely even managed that photo because about 30 seconds later, 10 minutes after we had arrived at the party, he spit up all over the onesie and proceeded to wear pajamas for the rest of the night.

No matter- he was the life of the party anyway!